In case you missed it, the world of chess was stunned on the tenth of April when Grandmaster Wesley So was forfeited in round nine of the 2015 U.S. Chess Championship after being caught “note taking.” Wesley, who is currently ranked number 8 in the world by FIDE, had already been warned twice in his previous games that his habit of writing notes during the game was a violation of the FIDE Laws of Chess. Below is a copy of the rules 21 Year-Old Wesley So was caught violating:

Article 12: The conduct of the players

When asked about his behavior during the round, Wesley first claimed that he did not realize he was breaking the rules. 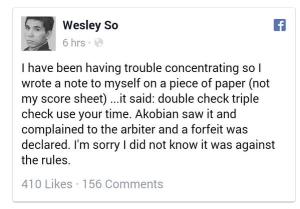 However, several witnesses immediately came forward to discredit this claim.

When he was at Webster, he was told at least a dozen times by his teammates and coaches not to do this. https://t.co/uFC8DXNEIe

After it became apparent that he knew it was against the rules, Wesley proceeded by blaming his earlier losses and cavalier disregard for the rules on “personal problems” in his family. According to the family he now lives with, So’s biological family and former coaches “conspired to destroy” his chances at the U.S. Chess Championship(an assertion that Wesley So has yet to contradict.)

Regardless of what other pressure Wesley may or may not have been under, the blame for intentionally violating the rules of chess has to be attributed to the player who committed the crime. At 21 years of age, Wesley So apparently lacks the maturity to own up to his own mistakes. Playing by the rules and taking responsibility for your own failures may not make you a grandmaster… but these qualities are prerequisites of adulthood.

For more on the rule violation by Wesley So which result in his forfeit loss to Varuzhan Akobian, please watch the thorough explanation that occurred during the live boradcast of the 2015 U.S. Chess Championship:

2 thoughts on “So Much to Learn: An Important Lesson from the 2015 U.S. Chess Championship”